Thursday May 21st saw me on the road to a local club pool (SAC-DP) at around 0440 but although the pool is normally only 10-15 minutes away I needed to deliver a friend’s belated birthday present en-route and thus had to make a slight detour and thus didn’t arrive until around 0520. I wasn’t the first there this time as there were 2 cars on the main mid-pool car park (and as two bivvies were up at that end of the pool I suspect the occupants were on a mission of more than one night/one day as they were still there when I left mid-afternoon – there was one car on the smaller car park down at one end of the pool – plus I suspect a car in the roadside lay be at the other end was also another member (certainly on leaving there were three cars parked up there with two members walking tackle bound towards the pool. Bit dodgy that lay-by – and the other one just around a junction on the other side of the road – with regular car break-ins – when I park in that area I actually park on the garden centre car park about 50 yards away which we are allowed to do for a payment of £2, worth it for ease of mind! But, (A) not sure if the garden centre is actually open at mo and (B) its only open 0900-1800 so if you’re fishing before or after those times its not a feasible prospect – so the padlocked mid-pool car park is, to me anyway, a far better prospect despite having a ‘heart attack hill’ to climb at the end of the day – and on this trip I had to leave the barrow at the bottom while I hand carried 2 loads up and then wheeled up the remainder and have a 10 minute recovery sat by car before loading it up!

Over the day quite a few others arrived too and still arriving for late afternoon and evening sessions as I left.

So, arrived, loaded the barrow and headed off down to the waterside to find an available swim – the pool has 60+ pegs but around half have been closed to conform to conform to the Angling Trust 15 metre (WHY ‘metres’??? We are no longer in Europe – about time we reverted back to proper Imperial measurements! So its actually 16 yards 1 foot 7 and a half inches, to me 16 yards is a close enough approximation and it would have been 15 yards if we were talking Imperial in the first place I suspect)…. The pegs are supposed to have been marked with paint sprayed green ticks for ‘available’ and red crosses for ‘do not use’ on both the platforms and the grass area by the peg. First problems there were ALWAYS going to be in my opinion were green spray paint on green grass – and with red/green colour blindness being be most common form of the ailment – double whammy on that??? I could just about spot the red crosses on the grass (I’m not colour blind but seemingly the paint had faded/washed off) and I could see no sign of the platform markings at all – as the platforms along the stretch I fished were made of plastic boards I assume they marks had been washed away.. anyway, I chose my peg, in the area I had wanted to be (no-one along that bank at all) by the fact that after close scrutiny that the pegs either side had red crosses but could make out nothing at mine – and generally the peg closures were alternated except for a few exceptions where pegs were slightly closer together… The club did send out a message detailing the numbers of the pegs available but cannot relocate that message at all – checked the club’s Facebook page, Messenger, my text messages and the clubs’ private WhatsApp mails… and not had a response to a post I put on the FB page about re-locating that info… new request made now… 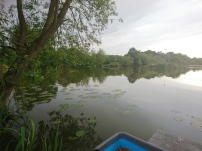 So, a peg found, I set up per usual with my float rod – again 6lb line, size 12 hook, 4AAA driftbeater float – and generally fished worm or worm pieces all day bar a few minutes with bunches of maggots, bread and sweetcorn but only had any responses on worm and maggots.

First cast was made at 0550 with laid on worm – rained a bit from 0630-0650, sharp drizzle I’d call it, not enough to put my main brolly up but enough to put up my ‘bait brolly’ to keep my baits dry. Actually one of those brollies that is meant for prams/pushchairs to shield the little ‘uns from sun/rain but is great for shielding my baits and can be attached to the bait table (not advisable when windy!) or to the back or legs of my chair and it has an adjustable gooseneck as part of its arm so it can be adjusted to suitable angles eg moved as the sun moves to keep maggots/worms cool out of direct sunlight – also quite light and fits easily into the rod rest pocket, along with the rod rests, of my quiver.

After that, until 1330, just a few little tweaks of the float – slight bobs, tiny lifts – that never developed into anything ensued….

1330 – first and only fish of the day – a small bream of about, possibly wishful thinking, 3oz…

… and that was it then bar a few more minor float wobbles until I packed in at 1530 in order to visit the chemist to pick up a prescription and to get home to unload, sort out fridge/freezer baits and get myself tidied up before collecting Liz from work and picking up the Thursday night KFC :)

BTW – I mentioned rubberising my landing net a couple of posts ago. I did my initial attempts just before my previous trip out – worked quite well and pleased with it but wasn’t quite there as I felt it needed extra rubber’ing (is that a word, Word doesn’t think so and can’t even supply an alternative but I’m sure my meaning is clear) which I did previous to this trip … feels better, like the commercial products in fact, but on this trip it neither was used nor needed and so still awaiting the ‘used in action seal of approval’…. hopefully next week J

Planning to be out with Liz on Monday although destination still to be decided…. :)

Thursday’s outing is now likely to be a Friday one as we have an appointment with the vet for a blood sample to be taken from one of our ferrets before she undergoes an operation to remove a small growth from behind her ear on the following Tuesday (2nd June)….