As said in the previous posting, with a few things going on, mainly having a bathroom refit (to be hopefully completed by this weekend) there had been a long spell – 19 days in fact, or rather 6 potential fishing days – between the last trip and this one. Anyway, this one day managed to get squeezed in and so on Monday 3rd June I headed off to the larger, and closest home, pool of my new club (SAC-DP) for my second session there since my membership started.

I set off from home around 0600, arriving around 0615, and was at my chosen swim for the day – on the dam wall of the pool which is actually a canal reservoir – having unloaded car and carted tackle around by around 0625. 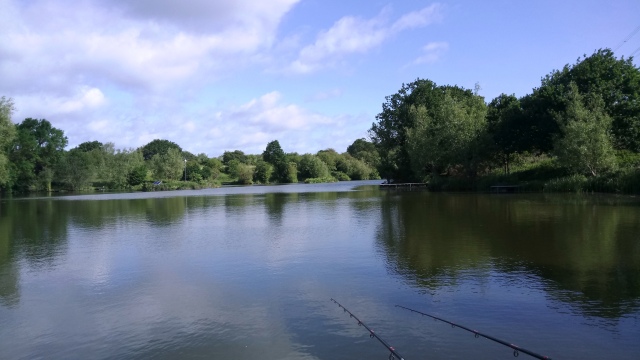 First thing on arrival I set up and cast out my Deeper Sonar to (a) look for depths/features and (b) spot fish hot spots. Depth I found almost consistently around me was about 4’6” except a rod length in front of the dam brickwork when it shelved down to 5’6” or so – and only spotted one sizeable fish (shows as an icon rather than the streaks of smaller fish). The sonar also reported water temps to be at around 18’C.

Scanning done, I tackled up with the usual two ledger rods and end tackle – 1.75lb TC Grandeslam Avon Extra rods, 8lb mainline straight through, and frame feeders – one rod with a size 6 hook (baited with chili sausage, bread, prawn over the session), the other with a size 12 (baited with a bunch of maggots, sweetcorn). Worms weren’t an option on this trip as my worm pit failed to produce any – too dry and they had burrowed too deep I think.

First casts were made just after 0700 – frame feeders loaded with my basic feed mix with added hemp, hemp oil, turmeric rice and dead maggot – with chili sausage and maggot on the hooks and I had frequent ‘bleeps’ on the maggot rod and the occasional ‘bleep’ on the sausage one but it was 1100 before the first fish came to hand – a small (2oz’ish) bream…

And following on, the rest of the day followed much the same pattern, producing just one more similarly sized bream and a crucian carp of around 4oz both on the maggot rod.. and the crucian ejected a small amount of milt as I returned him so seems that spawning may be due or even ongoing.

Not a productive day in terms of catching but a pleasant warm and calm’ish day to be out on after being stuck at home for nearly 3 weeks and much enjoyed. And the others who arrived – most seemed to be fishing the pole – those that I could see anyway – were also only catching the odd skimmer….

As I was packing up a guy came past and chatted – he said its normally a good area he said but recently gone quiet – I suspected, and he agreed, that probably they’d gathered at the other end of the pool to spawn in the shallows. So next visit to this pool I’ll probably try down towards that end….

Well, the next possible time I’ll be able to get out now is Thursday 20th June … and as the river season opens on the 16th I reckon it’ll be a trip to the River Severn (Middle section in the Bridgnorth area) after barbel and chub … and Monday 24th June may depend on Liz and so it will most likely be Warks Avon for bream or a club pool for tench (a National Trust pool that still operates a close season) but other possibilities too. And, Sunday 30th June, Liz and I are fishing a private water that is generally unfished except for 4 weekends of the year when the owner, as part of his charity days, invites one of my clubs to fish on the Sat/Sun with a limit of 6 anglers allowed per session in return for a £10 charity donation each angler/session – and we usually have a good days fishing – and we may also book extra sessions later.

So… tight lines to all in the meantime … and best wishes to all those venturing out for the river opening!!