Thursday, May 11th, and I set off at 0615 for another club water (KF-WL1) – this being the smaller of two pools on the same site intending to do a spot float fishing. 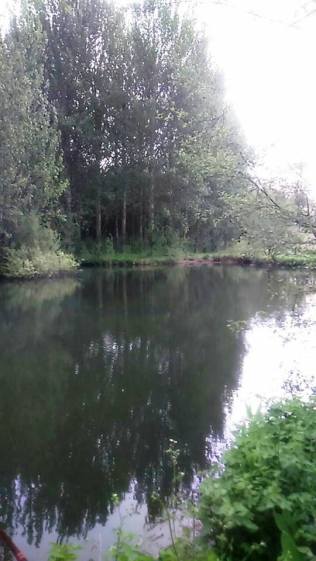 The pool contains many species of fish – carp, roach, rudd, ide, tench, perch, etc – and is an ideal venue for float fishing with the water depth at around 6’ where I was sat. However, it is prone to water weed growth (pomatogens) as the water warms up and does reach a point that it becomes unfishable due to total weed cover … and it appeared that this was due to happen as the weed could be seen in large patches – and seemed to be growing in front of my eyes as the day wore on – but that could, and probably was, due to the changing depth and angle of light.

Due to this weed I had a bit of difficulty setting the float originally (had intended to fish ‘lift method’) – it seemed to be doing strange things but why became clear when the light allowed me to see the weed – some clear areas, some well weeded up to 18” or more off the bottom and so the bottom weight wasn’t reaching bottom in those places … anyway, I soon discerned that an area about 15’ from bank outwards and about 6’ wide directly in front of me was relatively clear and so I fished and baited this area without problem once the situation was known.

Bait was 2 or 3 maggots. I tried a small piece of meat several times too but with no takes.

Also at the start of the day a common carp of 5lb+, possibly 7lb, was hooked and played for a short period but, unfortunately, when extra pressure was needed to be applied to try to prevent the fish gaining sanctuary under overhanging bushes the hook pulled free…. 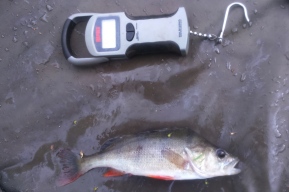 There was a very cool and lively breeze over most of the day and I left for home at around 1445.

Next trip out on Monday 14th – to a club pool I’ve only fished once before – in 2016 or possibly even 2015… nice pool though. And then Tuesday to my other club’s mixed but non-carp (although reported that they’re planning on adding them) pool.