Thursday 29th March 2018 saw me heading out at 0720 for a last pike session of my current pike season – I only pike fish during the period October 1st to March 31st of the following year for two reasons (a) it gives the pike a rest (ha ha, not that I bother then during the season anyway!) and (b) there are many other species to be focussed on.

So, I arrived at my chosen venue (Pike Water 24) on a quite warm and pleasant morning and made my first cast with my float rod baited with maggot at around 0830 … as I wanted to catch some livebait prior to pike fishing. I’d decided to bait fish until 1130 or until I’d got 6 baits in the bucket whichever came first but the silvers weren’t very forthcoming and, as by 1100 I’d had only one roach of around 2-3oz to show for my troubles and then, after getting the line caught in a bush and despite freeing it without a break-off, I ended with a glorious end-tackle tangle so rather than re-tackle the bait rod I decide to switch to the pike rods. Also, over this time, the skies had clouded over and an easterly breeze had picked up making the thermometer stated 6’C feel more like -6’C with the wind chill factor – and I was facing directly into that breeze in a swim that was not brolly friendly.

So, I set up my two pike rods (actually, Ron Thompson ‘Desperado’ carp rods of 2.75lb TC). Both rods were tackled up identically – 40lb braid mainline to 30lb wire traces fitted with 2 x size 2 double hooks, small (10g) Fox floats weighted by Grey’s slotted/quick change leads and set to fish at around 8′ deep in 10′-12′ of water between 1-4 rod lengths out.

One rod was baited with the live roach (lower hook in lip, other at base of the dorsal fin to maintain horizontal presentation) and the other with one of the sardines (lower hook under dorsal fin, other in root of the tail to present in a head-down fashion) that I’d taken with me in case of failing to catch any small silvers – often when you do catch it tends to be bream of 2lb+ or chub of similar size if the silvers don’t play ball … but on the day not even those showed up.

And, despite the skies brightening a little, the wind chill started to increase further…. despite having risen from 6.8’C first thing in the morning to 7.2’C on leaving.

So I fished until 1430 before calling it a day and heading home to a hot bath… and in the intermittent time not a lot happened. The sardine was not touched at all… but I may have had one take on the roach, unless it suddenly found enough energy after an hour and a half to ‘zoom’ the until then stationary float (apart from minor drifting on the breeze) several feet across the water surface and then pull it under a couple of times. Whatever, a strike struck nothing and the roach showed no evidence of teeth marks or other damage. And at the end of the session the freed roach did swim off strongly… 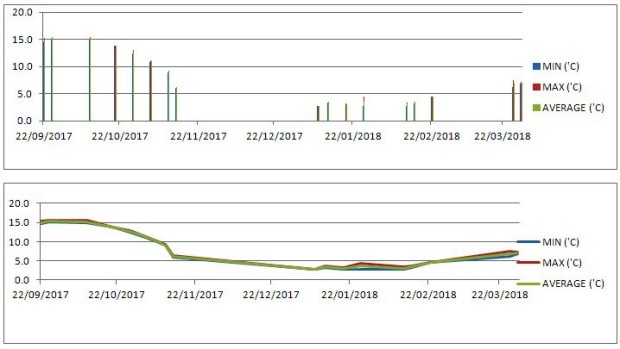