Friday 29th July 2016 I had planned to visit a small local river which I had not fished for a few years but the weather forecast wasn’t so good and so I elected instead to head off to a club carp pool (GH) – but in search of chub primarily with the hope of bream, perch and roach perhaps coming into the picture too.

And so I arrived at the pool (well, technically a ‘lake’ as the definition of a lake is a body of water of over 0.5 acres in size, smaller than that a water is a ‘pool’ though…) at around 0645 finding one other angler already there – seemingly just arrived as he was tackling up – but he was further round the pool than my intended swim of peg 10 which is on the ‘tree’ bank – a lot of tall trees and overhanging bushes along this banks makes it conducive to chub.

Plan for the day was to fish the float ‘on-the-drop’ and as the water is around 11′ deep two rod lengths out – just off the end of an overhanging bush to my left – this necessitated the use of a sliding float. The float was set so that about 3″-4″ of hook length lay on the bottom after the bait had sunk fully, and with the bottom shot (No 1) about 3″-4″ above bottom. A small bodied waggler was used that was cocked with 2 SSG bulk shot at around 5′ deep and two No 1 shot – the telltale at around 6″ from the hook and the other midway between bulk and the telltale. When this setup was cast into the water it took several seconds until the float started to cock and then another 5 seconds or so until it sat at its fully settled position. Thus it was easy to spot abnormal behaviour of the float due to the bait being taken as it fell through the water and once settled the bites were generally of a ‘lift’ type.

Anyway, before setting up the tackle, I mixed up a batch of groundbait (crumb/particles/maggots/etc) as per usual,and this time dyed the mix a bright red colour by the addition of red food dye powder to the mixing water. Several tennis ball sized portions of this were thrown out… and before the tackling up was complete the area was fizzing like Alka Seltzer with bream bubbles in abundance…

So, it wasn’t long after casting out my worm baited hook that the first bream came to the landing net – 1lb 6oz…. and over the day I must have had another dozen or so … but all small with the largest registering just 2lb 1oz. The bream were supplemented by quite a few roach too – albeit these also being on the small size with the best possibly at around 8oz. Fish were caught on worm, maggot, bread – switching whenever the one in use started to ‘fade’ – but sweetcorn was entirely shunned it seemed as not one nibble was had. I think I may have had decent fish on at one point too – possibly the chub I was after, certainly wasn’t a bream although its possible it was a carp – but I suffered the dreaded hook pull…. :(

And all day there had been carp cruising around taking bits off the top, so for the last hour I pulled out my ‘floater’ rod and fished floating crust – which was not easy as the loaf I had bought for possible bait use, was a small Warburton’s off the ‘end of life’ shelf in the supermarket. Needless to say there wasn’t really enough of it and what there was was a bit dry and didn’t grip the hook too well especially when wet and the carp were ‘testing’ the bait by suck’n’spit and a bit of tail bashing. I wished I had put my dog biccies in the bag… Anyway, I did manage to get two carp out – a leather of 3lb 12oz and a fully scaled common of 4lb 14oz both in pristine condition… 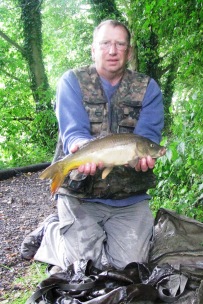 So now looking forward to the next outing – to that small river that I put off… :)